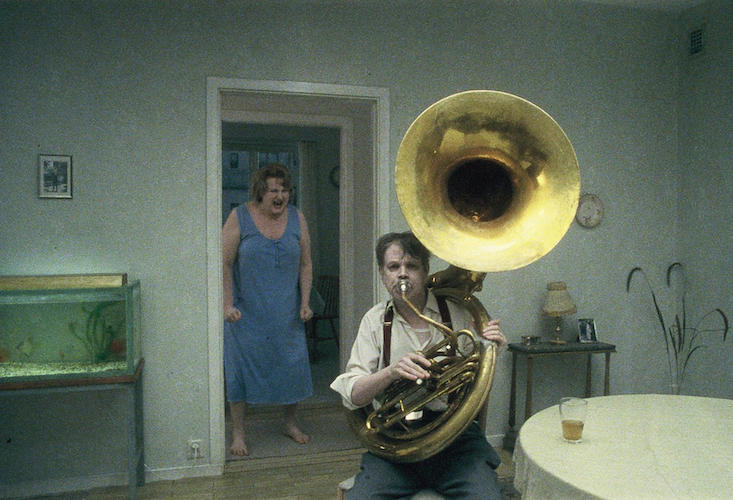 It’s difficult to convey with mere words why the Swedish film, You, the Living, is so amusing, especially since so much of its humor is visual. A funhouse mirror’s reflection of humanity, You, the Living has no real plot per se, just a series of vignettes featuring various eccentrics coping with the absurdities of modern life. Some characters are recurring, such as two middle aged members of a marching band, a forlorn young woman obsessed with a rock star, and a couple perpetually on the verge of a breakup. Others, like an elderly man blithely dragging his leash-entangled dog behind him as he shuffles down the street with a walker, appear only once. Happiness is short-lived: an attendee of a dining hall celebration is having a good time, until his son phones him for money; a businessman is excited about closing a deal, until his wallet is stolen; a woman is enjoying a dream about her wedding night, until she wakes up. And so it goes.

Writer/director Roy Andersson is not a prolific filmmaker. Over the course of fifty years he’s made only six features. You, the Living was released in 2007 as the middle chapter of three thematically connected films known as “The Living Trilogy.” It began with Songs from the Second Floor in 2000, and concluded with 2014’s A Pigeon Sat on a Branch Reflecting on Existence. Even though all of them come highly recommended, critically speaking You, the Living is considered the best of the bunch. It was even Sweden’s submission for Oscar consideration in the Best Foreign Language Film category of the 2008 Academy Awards.

You, the Living is a showcase for the distinctive aesthetic Andersson carefully honed while directing over 400 commercials. He shoots from a distance without cutting or moving the camera. His compositions are impeccable. Some scenes are indoors. Some are outdoors. There’s even an amazing birds-eye view of a city. They all look as if they’re actual locations, but there’s also something slightly dreamlike about each of them. That’s because virtually every setting is a carefully engineered construct within Andersson’s Stockholm studio. He combines detailed miniatures, forced perspectives, and matte paintings strategically placed in front of the camera to create the illusion of sky and cityscape backgrounds, all without the aid of computers. Only one scene involving rain was actually shot outside on a real street. The entire production is a marvel of set design, reminiscent of the faux city Jacques Tati constructed for his 1967 masterpiece, Playtime.

The sad sack cast is comprised almost entirely of non-actors. Everyone is pasty white, providing an ironic counterpoint to the title of the film by looking more dead than alive. Andersson’s drab and precisely controlled bluish-green color palette accentuates their sickly pallor. Their performances are carefully modulated, their delivery is mostly deadpan, and they often talk directly to us, breaking the fourth wall. A complete lack of close-ups keeps us at an arm’s-length emotionally, inviting us to observe rather than empathize. It’s a bit like looking in on a people-populated ant farm.

You, the Living won’t appeal to everyone, especially those that don’t have a taste for wry humor. But if you’re brave enough to take the red pill and enter Andersson’s Matrix-like world, you can look forward to a viewing experience quite unlike anything else. 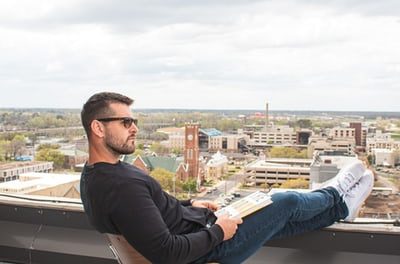 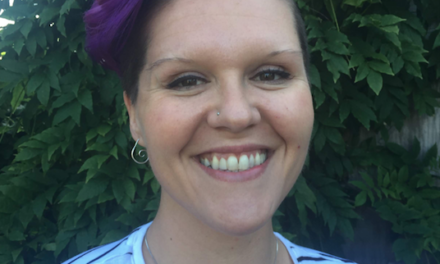 Randi Reed: The LGBTQ Rollercoaster Guide to Becoming a Parent 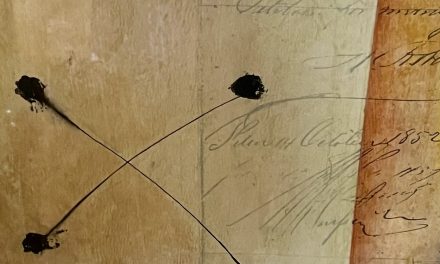 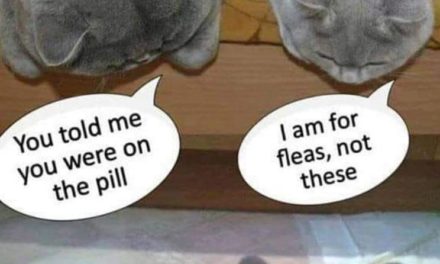