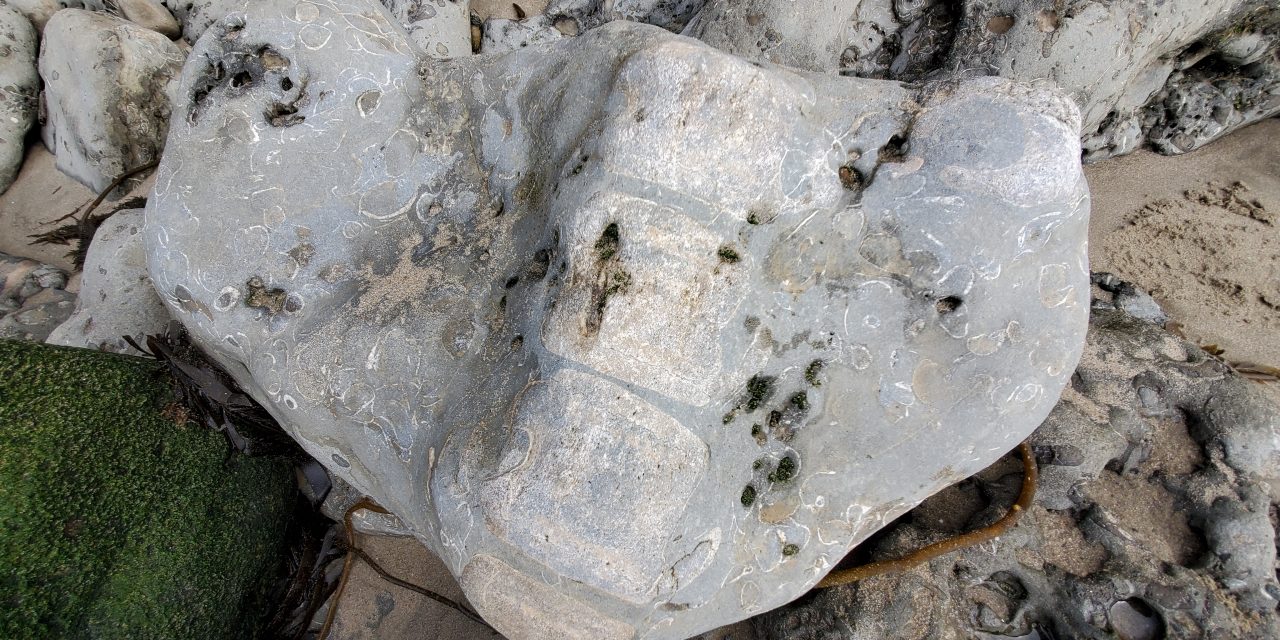 Host: People here in Santa Cruz are part of a growing field called community or citizen science. For the region’s amateur fossil collectors, their finds might just help paleontologists figure out what life was like millions of years ago right here on the central coast. A new study examined how many vertebrate specimens collected in Santa Cruz County by amateurs ended up in museums and academic research—and it turns out, it’s a pretty substantial amount.

Fossils are remnants of ancient organisms buried in the earth, reminders of eras long ago.

Some fossil fans take their enthusiasm beyond admiring and into the realm of amateur paleontology—where individuals without formal university or job training in the field collect fossils.

And these folks can make major contributions to paleontology, according to a new study published by Bobby Boessenecker. He calls his research paper…

Boessenecker: “…a big love letter to my amateur colleagues.”

Boessenecker is a marine vertebrate paleontologist at the College of Charleston in South Carolina. But as a teen, he searched for fossils in Santa Cruz County.

Now, he wants to encourage and build relationships with community scientists like he was back then.

Boessenecker compared the relative amounts of significant discoveries made in Santa Cruz by amateurs and professionals.

Boessenecker: “Once I started doing a little bit of background research on it, I realized nobody’s ever quantified the relative contributions of amateurs and professionals at the same location before.”

First, he examined who donated specimens that came from Santa Cruz to the Santa Cruz Museum of Natural History and the University of California Museum of Paleontology in Berkeley.

He found that amateur-donated specimens dominate the Santa Cruz museum. The Berkeley museum, however, is a regional museum, and its collection mostly has finds by academic paleontologists. But…

Boessenecker: “…The fact that 1/3 or half of the specimens are still amateur finds, and they made it into that collection anyway, tells me they’re not just terrible, little scraps of bone tell you very little. They’re still scientifically informative specimens.”

Boessenecker: “A large number of those papers did, I believe more than half…It basically tells us that paleontologists over the past century have benefited from the activities of amateur collectors.” 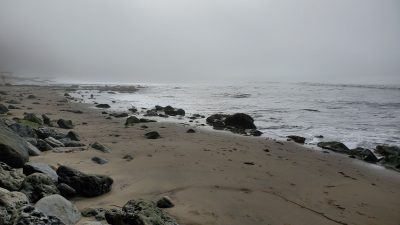 Here at New Brighton State Beach, if you look closely, you’ll notice that some rocks are embedded with off-white streaks that feel smoother than the surrounding stone. These are vertebrate fossils.

And fossil hobbyist Brian Phan just found an impressive one. He points to a two-foot-long row of rectangles ingrained in a large rock.

Phan: “This is a whale spine. You can see the different vertebrae of this fossilized whale…And this is what…the whales’ ancestors used to be that we have here in the bay. That blows my mind.”

Phan is a marine biologist turned science communicator in grad school at UC Santa Cruz. He’s not a paleontologist, but he loves looking for fossils and has been admiring the ones at New Brighton for the past six years.

Phan: “For me, this is kind of the hidden gem of Santa Cruz County…Not many people know about the fossils that you can see on the cliffside.” 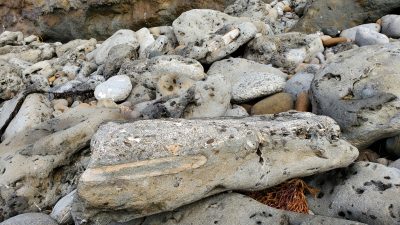 Some locals know this beach as a goldmine for fossils. Here in the state park, however, it’s illegal to collect without a permit. But paleontologist Boessenecker knows plenty of other fossil hotspots in the county.

Boessenecker: [5:00] “There’s a rock unit called the Santa Margarita Sandstone…It forms these bigger rows of cliffs all over the Ben Lomond, Felton, Scotts Valley area…You can find nine- to 12-million-year-old sharp teeth, fishbones, fish teeth, and then teeth and bones and skeletons of marine mammals including early sea lions, walruses, sea cows, dolphins, there’s even a beluga from there.”

Boessenecker began collecting fossils in the Santa Cruz Mountains as a highschooler. He soon met fellow hobbyist collectors in the area and became part of the amateur community.

As he continued pursuing paleontology professionally, he maintained his relationships with the network of community scientists here. That serves him well now.

Boessenecker: “If I hadn’t made any friends with the amateur community in Northern California, I wouldn’t know about anything eroding out of the cliffs. But because I stay in regular contact with these friends of mine, they let me know when something cool is eroding out.”

Amateurs have a leg up at these fast-eroding locations. They’re usually checking the sites much more frequently than professional paleontologists, meaning they’re more likely to spot an important fossil.

Ultimately, Boessenecker hopes this study encourages professional paleontologists to connect with community scientists and that it broadens the appreciation of amateur contributions to paleontology. 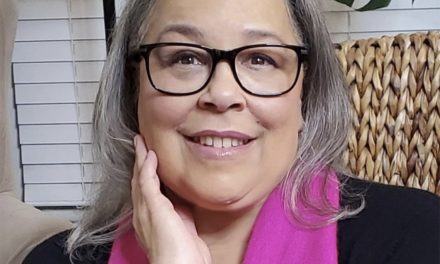 “The Life of William Grimes: The Runaway Slave” with his 3x’s Granddaughter 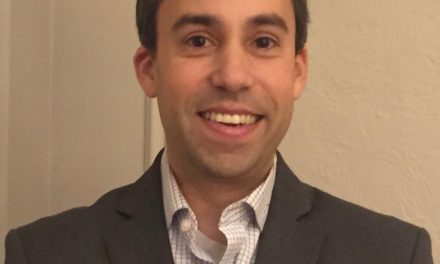 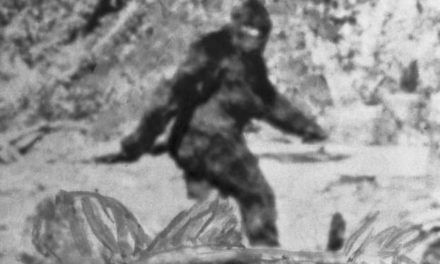 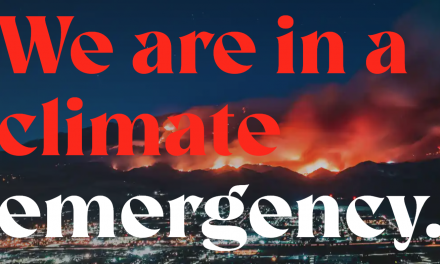